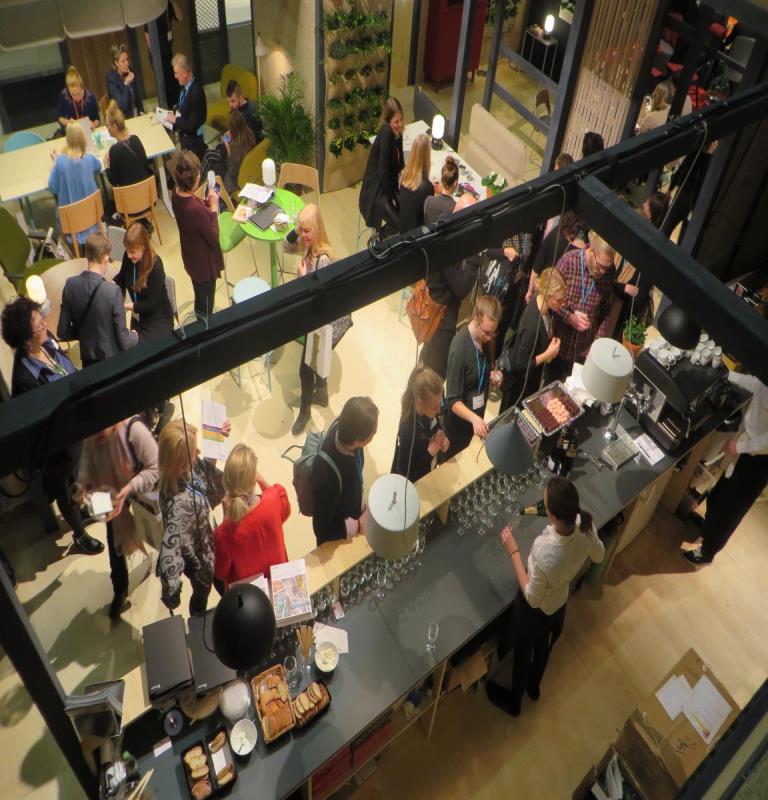 Stockholm was cold with a thick layer of snow which looked beautiful and caused little in the way of disruption. Quite why this show is held in the coldest month of the year in a city which many think has rather greater charm in the summer is a mystery that even the locals can’t answer. Sweden’s buildings are all well designed for winter and shut out the cold very effectively; perhaps rather too well in some cases, because overheating can be a problem.

The city’s cosy bars and restaurants weren’t busy and visitors were welcomed enthusiastically. The hearty Swedish food is more in tune with winter, especially when washed down with a glass or two of the fiery Aquavit.

The Stockholsmässen exhibition centre at Älvsjö is well served by comfortable, fast trains from the city centre and as you’d expect, it is modern, conventional and well arranged for the first time visitor, who can find his way about without difficulty.
The show was held in three halls, quaintly named Alder, Birch and Cedar. In previous years, office, contract and residential furniture were displayed separately but this year, there seemed to be little in the way of such helpful organisation which meant that visitors interested in only one product sector had to walk further and see much more irrelevant product than should have been necessary. It was said to be as a reflection of the increased crossover of the types of product but if a visitor has only a limited amount of time available – and most do – this lack of discipline in planning layout is unhelpful and smacks of laziness.

Most trade shows feature the big names with their big stands at the front of the halls but as the intrepid visitor works his way through each hall, quality declines until at the very back, he finds only the “also rans” – frequently the far eastern cheap and nasties. This show however, with its overwhelmingly Scandinavian influence, showed a consistency of design and manufacturing quality which meant the visitor needed to walk all of every aisle or risk missing some gems.

There were some exhibitors from outside the region, but proportionately very few. Three or four German companies, a handful of Italian and Spanish but what this show was really all about was a brilliant celebration of the best of outstanding Scandinavian design. Some names one recognised, but there were many, many more that were quite unknown. Some of the companies, with beautiful, original displays of the highest quality products were really very small in international terms. How can companies with sales levels of just three or four million Euros afford to put on the show they did? A massive and risky commitment.

For the visitor, it was almost overwhelming. Such style; so much innovation. No chance of being bored with repetitiveness. Everywhere one turned, there was yet another previously unknown company presenting their solution to an organisational, acoustic or aesthetic issue. And with such verve! Such self-confidence.

Most of the stands were not, of themselves, massively expensive. They were however invariably imaginatively designed and thought provoking. Quotations and bylines – always in English of course – were liberally splattered about and graphic images were often bold, attractive and eye catching.

Exhibitors often expressed an interest in exporting but which one felt was often half-hearted. It was as if they knew that, although their designs were internationally respected and admired, their costs were always going to be too high for most overseas markets. And maybe that’s why so many companies have remained relatively small and introverted. Their home markets want their products and demand their high quality standards – and will pay the consequently high prices.

Much of the emphasis from the office furniture brigade was on enclosures with every variety of meeting area, conference and collaboration territory and individual concentration space you can imagine. There was very little in the way of innovation in desking or tables but those that were displayed were generally height-adjustable. However little fuss was made of them as if they were taken for granted.

There was plenty of real wood veneer and wood grain laminate on show, but also lino, glass and reconstituted veneers. Upholstery colours were generally plain pastels and earthy, with just a few bold and bright reds and blues thrown in for luck. There was some beautiful upholstery and stitching details that lifted the generally plain fabrics, notably felt, being used. Plastic shell and upholstered chairs with light-coloured, wooden legs were everywhere.

Many of the companies in the region are long established, some tracing their roots from the 1920s or 30s, which they broadcast prominently on their stands. Their pride is understandable when internationally, the average age of an office furniture company nowadays is probably no more than ten or fifteen years. The Nichetti Studios designed stand for Kinnarps was based on their interpretation of the company’s ‘2015 Trend Report’ which itself picked up on the Steelcase theme floated at last year’s Neocon – that office layouts and furniture configurations need to cater for both introvert and extrovert personalities. Amongst the breakout soft seating products were several that attracted attention. The Swedish company from Värnamon, Jonas Ihreborn showed a new range of loose modular seating, Honey, with different height backs that could be configured at will, and Story, a segmented high-backed sofa system. 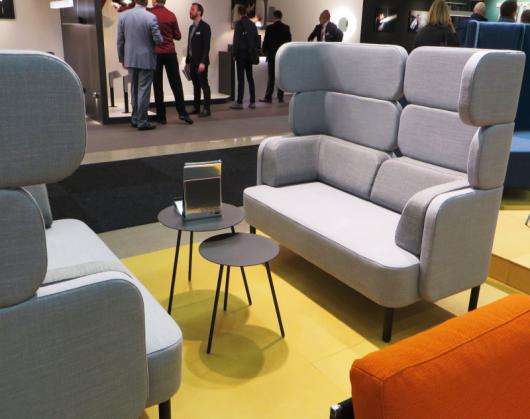 The strangely named Massproductions company from Stockholm prides itself on quickly turning its individually created products into high volume commercial production. Two examples were the Tio conference table and the wheeled Dandy sofa. 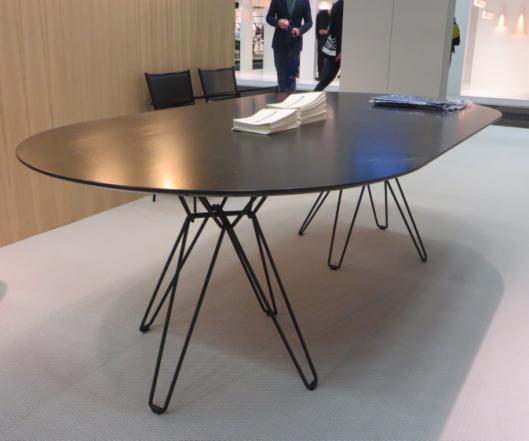 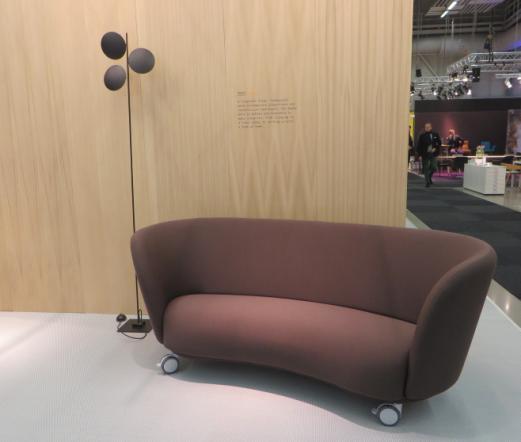 The Pato chair from designers Hee Welling (Denmark) and Gudmunder Ludvik (Iceland) for the Danish company, Fredericia, came in dozens of different colours, finishes and configurations. As with so many of the companies and products on show, and just as one would expect, this chair came with a strong environmental story.

Normann of Copenhagen and Jorgensen from Norway were two other companies showing finely crafted upholstery. 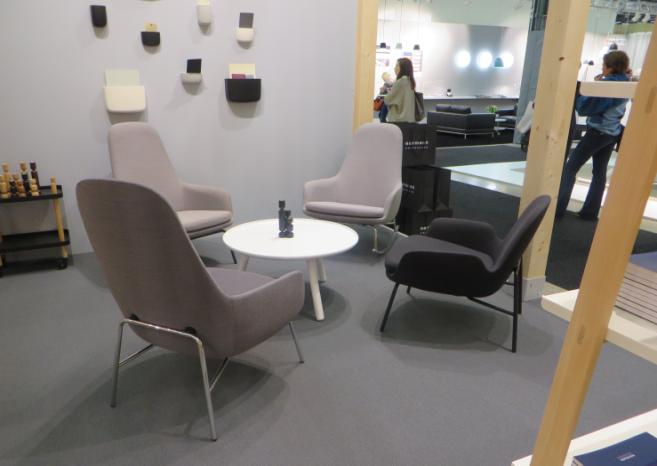 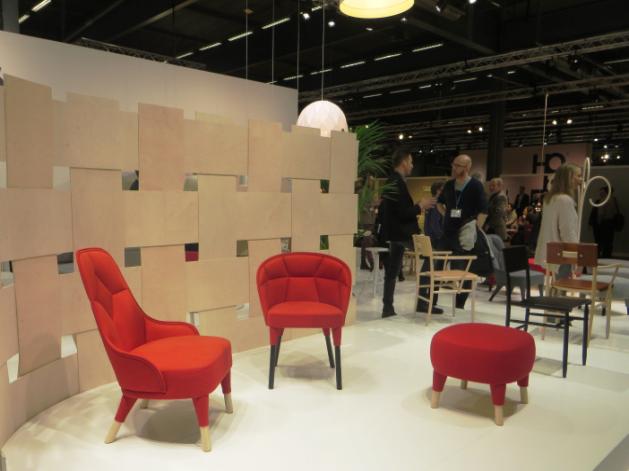 Howe a/s, the Danish company showed their famous 40/4 chair from David Rowland and also the revived Arne Jacobsen model, the Munkegaard chair, named after the school in Copenhagen created by the architect in the 1950s. 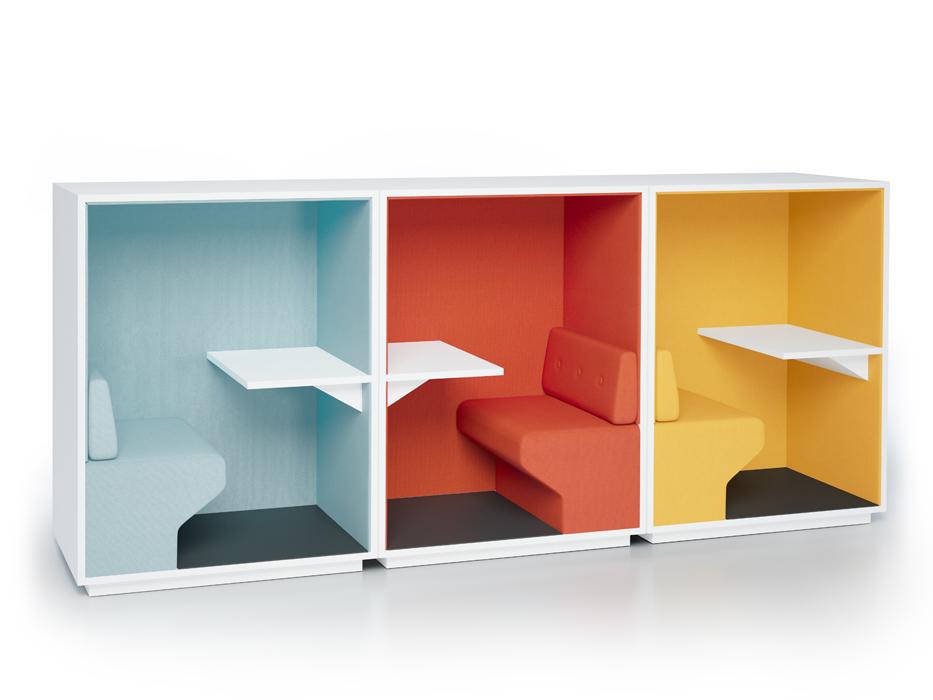 There were enclosures of all shapes and sizes. Among the most interesting and original were Mute floor designed by Fredrik Mattson for Horreds Mobel AB, the Swedish manufacturer, S Line’s glass and aluminium acoustic chambers and especially, the really clever Inno Pod from Denmark’s Four Design – a mobile and linkable working or collaboration acoustic enclosure on wheels. 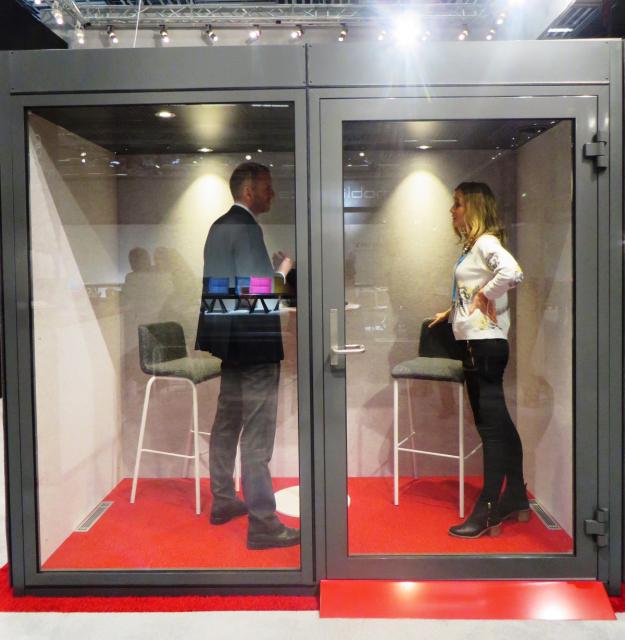 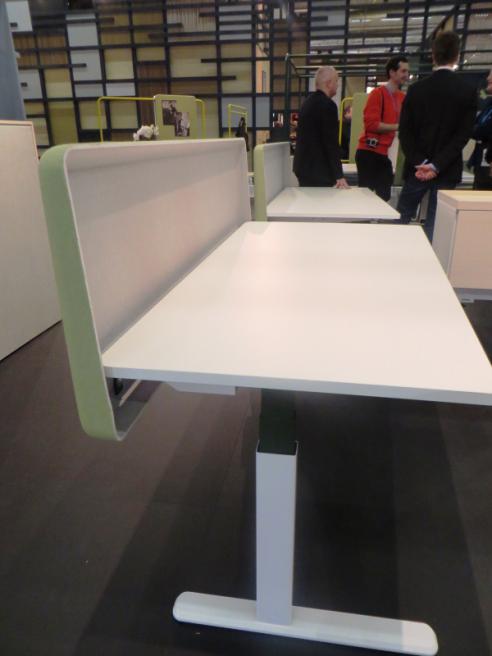 One of the most eye-catching chairs was Skandiform’s Petals from Stone designs. 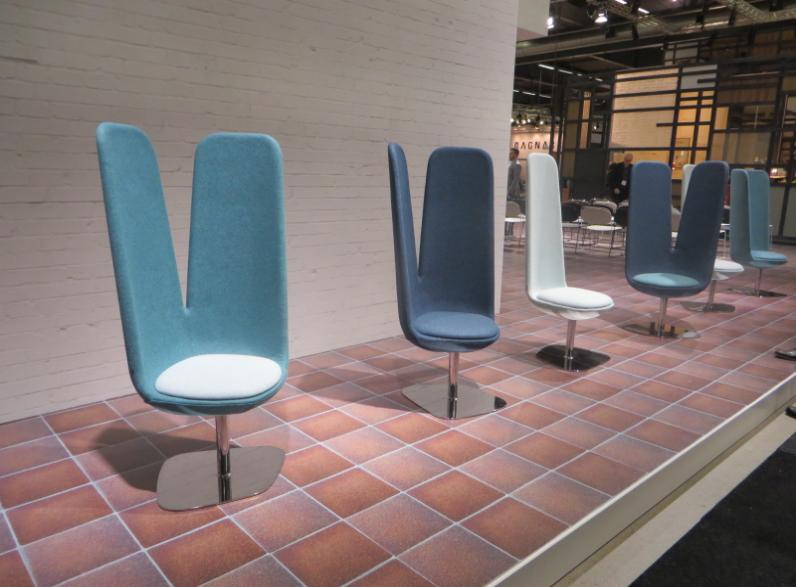 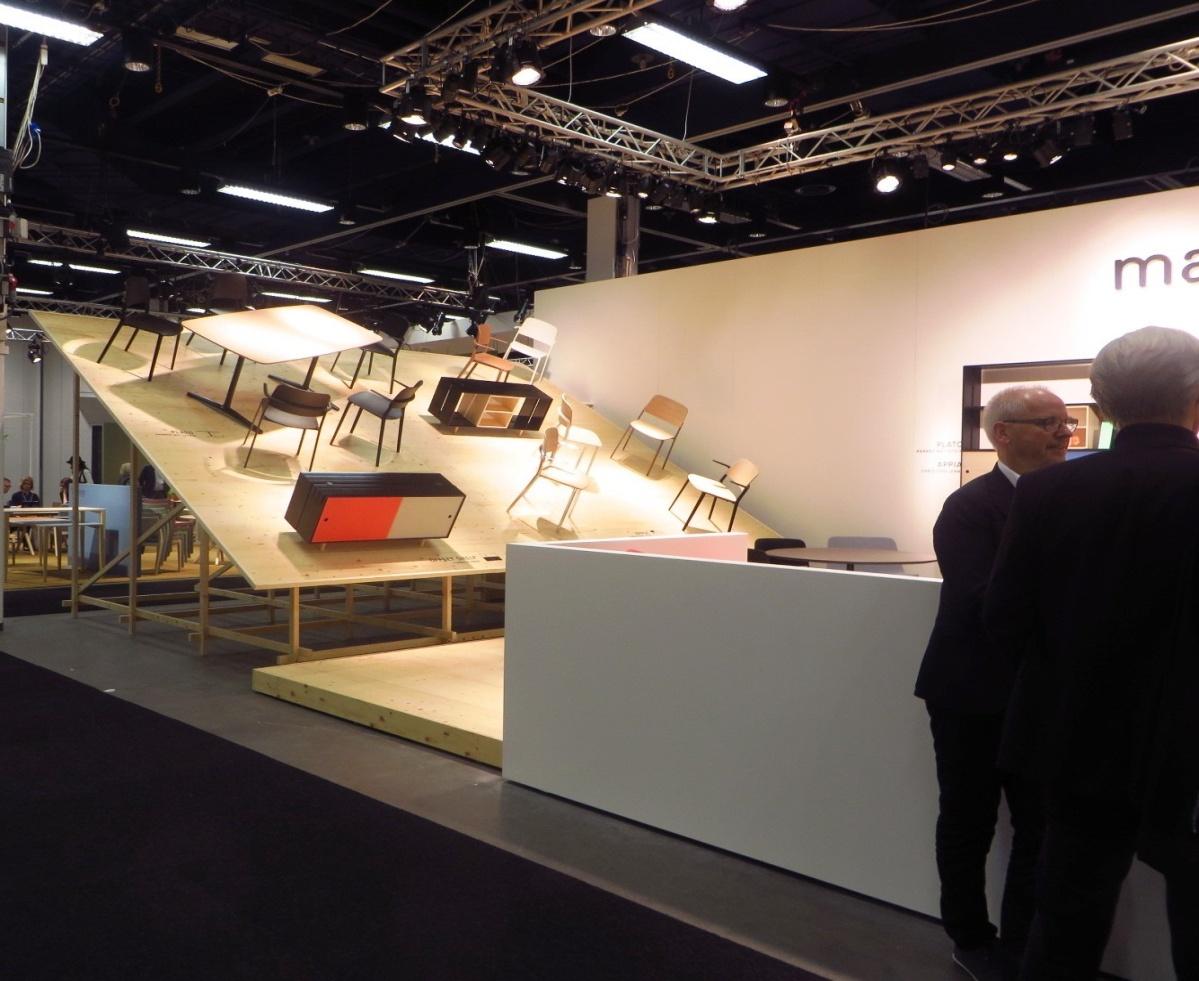 The JSA prize for the best display went to Italy’s maxdesign with each side of their stand sloping away at 45 degrees creating a great furniture viewing perspective.